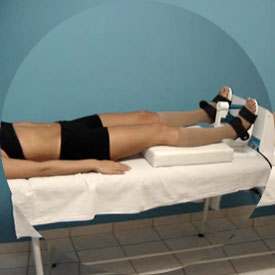 RAGodoy® for the lower limbs is an electromechanical device that performs ankle flexion and extension simulating gait. Therefore, its mechanism of action is to exert vis-a-latere pressure on the vessels and increase the pressure in the interstitial space thereby potentiating the formation and drainage of lymph. This technique was proven effective in the mobilization of macromolecules by lymphoscintigraphy. It can be used for the lower limbs for several hours at a time, with or without compression. Studies have shown its efficiency in reducing edema; one study presented at the 41ST EUROPEAN SOCIETY OF LYMPHOLOGY (ESL) CONGRESS - Lausanne, Switzerland in 2015 was performed by a Spanish researcher who showed that RAGodoy® produced greater volume reductions than the complex physical therapy technique.